Conceived as a ‘drop in centre for children and old people and a space for viewing cartoons’, Dan Graham’s Waterloo Sunset at the Hayward Gallery 2002–03 is a space for social interaction, learning and fun that is open during and in between exhibitions. 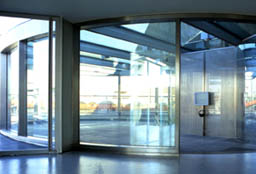 Dan Graham’s work analyses the social functions of contemporary cultural systems, from architecture to rock music and television. His influences are wide-ranging and eclectic. They include minimalism, modernist architecture, the city plan, Renaissance gardens, skateboarding culture and rock icon Patti Smith. His creative output stretches from conceptual text work, photographs, performances, time delay video works and architectural models to his signature two-way mirror glass pavilions. Without exception his work exists in the boundaries between disciplines; as he says, ‘I like things that are hybrids’.

Graham’s pavilions are sculptural examinations of modernist functionalist architecture which mimic the materials and forms of the modern city but take their precedent from a wide range of architectural typologies spanning several centuries: from the oculus of the Pantheon to the nineteenth century gazebo, modern pavilion forms such as Mies van der Rohe’s glass pavilion for the 1929 World Fair in Barcelona, the conservatory and the contemporary bus shelter. In a technique which he calls the ‘mirror effect’, Graham combines clear, mirrored, and semi-reflective glass panes in order to frame a range of shifting social interactions.